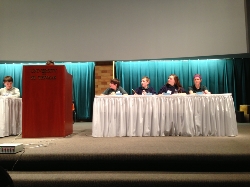 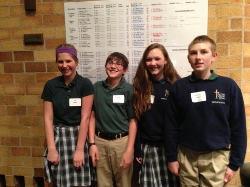 The team came back in the second round against Carondelet Catholic School of Minneapolis, 18-14.  The total points were then tallied for all participating teams during a lunch break prior to round three where the top twenty school moved on to a championship bracket and the bottom 23 schools a consolation bracket.  SCCS emerged after the morning with a place of 14 overall and a spot in the championship bracket against Sacred Heart Catholic School of Robbinsdale, which had earned a seed of 7th place after the morning rounds.  SCCS found their stride taking the round 18-8.

From this point, the top ten schools by total points advanced in the championship bracket.  SCCS earned a first place slot going into round four against the currently ranked tenth place team, which turned out to be a re-match with Minneapolis Carondelet.  The team scored another victory, 18-14, and with the score of 18 points advanced to fourth and final spot in the semi-finals.  In a point-for-point match-up, SCCS competed against last year’s second place team--St. Paul’s Nativity of Our Lord.  SCCS secured a victory in the final two questions and won the round 16-13, advancing to the finals.

The finals were held on stage for the entire Quiz Bowl audience to view.  SCCS faced a tough opponent, St. Thomas Academy of Mendota Heights, and started strong, but eventually earned the second place honor with a score of 20-11.  Congratulations, Brienna, Nicholas, Lily,  Noah and their coach Ms. Malovhr on a strong performance and a stellar day!
Print