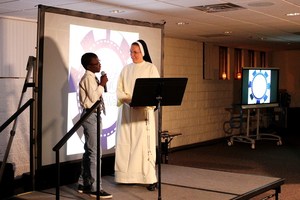 Thank you to all who attended and supported this year's Light Their Way gala.

Enjoy a full photo album and a delightful video, The Joy of St. Croix Catholic School.

While we’re still crunching numbers, it’s appearing that this year’s Light Their Way tuition assistance gala was a grand success.  Thank you to all who made this important fundraiser possible so that we can continue to open our doors to all who desire a faith-based education.  A very special thank you to a young leader, Evan Stoerzinger, a fifth grader at SCCS who shared with those in attendance his desire to raise money for his school.  Evan donated $40 of his own money and asked others to also support the school he dearly loves. The outpouring of generosity that resulted was due in large part to Evan’s sincere message. We are grateful to Evan for his beautiful example of generosity and virtuous leadership.

Meal:  Dave Middleton and kitchen crew for preparing a delicious meal and Paul and Katie Kaari and Josh and Christy Eberhardt -- along with dozens of adult and student volunteers for serving a very large crowd in an efficient manner.

Special thank you to the Lemanski family, an alumni family and owners of PJ Murphy’s Bakery.  Since we have been holding this annual event, the Lemanski family has been donating the desserts.  Please think about PJ Murphy’s for your own celebrations this spring.  Thank you also to The Grand, Donald’s Apparel, TADS Tuition Management, ProjectHAL, and St. Michael’s Council of Catholic Women for their generous donations in support of the event.

Paul Loomis and Bob Durland for a beautiful video that really captured the Joy of St. Croix Catholic School. Rob Gag, Andrew Pohlena, and the entire Tierney Brothers organization for their generosity, not only tonight in their contribution of top-notch audio/visual equipment, but Tierney’s support of all Catholic schools.

Thank you to the Men’s Club,  Dan Eder and the Knights of Columbus, and Yocum Real Estate Group for supplying beverages.

Thank you to Jim Cunningham, Game Host and Minister of Fun for the MN Twins and MN Wild, who has shared his talents with us as master of ceremonies now for the past three years and to Lino Rulli, The Catholic Guy, who delighted the audience with humor and faith.